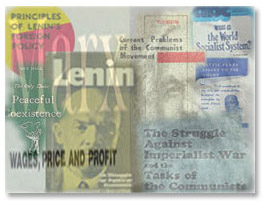 The Pamphlet Collection represents one of the most unique portions of the Meyers Collection. It consists of over 5,000 pamphlets, flyers and brochures representing the Communist Party, Socialist, and other leftist movements.

Another large portion of the pamphlets deal with the period of McCarthyism in the United States during the 1950s.

The Pamphlet Collection is cataloged in the FSU Catalog.