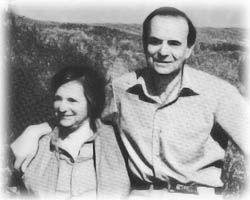 Victor Perlo, 1912-1999, was a preeminent Marxist economist, member of the Communist Party, USA, and the chair-emeritus of the Party’s Economic Commission.  Mr. Perlo was born on May 15, 1912 in East Elmhurst, New York. He was the son of Russian-Americans who had both emigrated from Omsk in Siberia. Perlo graduated from Columbia University in 1933 where he received his Bachelors and Masters in Mathematics and Statistics.

Perlo joined the Roosevelt Administration serving in various New Deal government agencies from 1939 to 1947. He was one of the group of economists known as “Harry Hopkins” bright young men. Along with other economists in the group, he worked for the enactment and implementation of the WPA jobs program headed by Mr. Hopkins. Perlo was also instrumental in getting unemployment compensation, the Wagner National Labor Act, the Fair Labor Standards Act, and Social Security enacted and implemented.

During World War II, serving as a department head of the War Production Board and of the Price Administration, Perlo used his intellect to defeat Hitler Fascism. Perlo also worked with the Brookings Institute in Washington, DC, a  prestigious think tank.

After World War II,  Perlo fell victim to the anti-Communist, anti-labor movement within the Untied States. From 1947 to his death in 1999, he worked as an economic consultant and a writer.

Perlo authored 13 books, which have been translated to many different languages and sold all over the world. Some of the most prominent works include American Imperialism (1951), Empire of High Finance (1957), Economics of Racism I and II (1973 and 1996), and Superprofits and Crises (1988). Following the publication of Economics of Racism, Perlo received the Myers Center Award for the Study of Human Rights in North America for his exceptional work on intolerance in North America.

As well as writing books, he wrote a numerous amount of articles in economic and political journals as well as many pamphlets. His column “People Before Profits” in the World was one of the most widely read. Perlo and his wife Ellen co-authored the book Dynamic Stability: The Soviet Economy Today.

Perlo was most widely known for his analysis of the political economy of United States capitalism, comparative economic systems, and the economics of racism in the United States. He also contributed to the concept of the profits and control to Marxist economic theory.